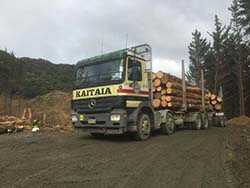 It goes on to say that in a High Court judgement released last month, it revealed an investigation by the NZ Transport Agency identified Whangārei-based Stan Semenoff Logging Ltd (SSL) had been issued an assessment for unpaid road user charges by the Agency for $532,878.96 over a 10-month period.

SSL operates a fleet of logging trucks which mainly transports trees from forests around Northland to the port at Marsden Point. During the investigation, the company operated at least 68 truck and trailer units which were liable for road user charges.

Heavy vehicles over 3500kg and those powered by fuel not taxed at source are required to pay road user charges. The purpose of the charge is to provide revenue to fund the costs of New Zealand's land transport system, including the building and maintenance of roads and infrastructure. The amount is higher for heavier vehicles as they do more damage to roads, and bridges and must be built to a higher standard to accommodate them.

NZTA analysed records for around 17,200 loads carried by Semenoff's vehicles and found the truck and trailer units were travelling above their maximum allowable weight on about 68 per cent of the trips — 11,690 trips —based on the records that were provided between July 2016 to April 2017.

Once the assessment was issued Stan Semenoff Logging sought an independent review. However, the NZTA assessment was deemed correct and then SSL appealed to the District Court.

In an affidavit presented to the District Court the general manager of SSL, Daron Turner, accepted the company owed $135,365.14 and what was at issue was the basis of assessment. It was submitted on behalf of SSL the methodology used by the Authority was "totally arbitrary and bears no relation to the actual distance travelled overweight".

Not satisfied with the decision of the District Court, the trucking company lodged an appeal with the High Court and said the District Judge's decision placed "excessive emphasis on compliance when there were other means of achieving compliance".

They said the Judge was wrong in law. The essence of NZTA's position was that operators had to have the correct licence at all times, for every load carried for the term of that licence. If the operator was travelling over the maximum weight permitted, they were liable for the road user charge that would have been payable for the correct licence.

After considering all the evidence Justice Christine Gordon dismissed the appeal and said the District Court did not err in law.