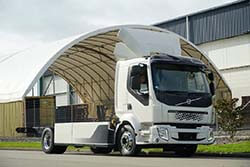 The Volvo Trucks journey to carbon zero transport started in New Zealand with the arrival of the FL electric truck in April. Since the 16T fully electric truck landed on our shores it has been put through its paces in a pre-commercial trial on New Zealand’s roads to validate performance data from Volvo headquarters in Sweden.

The FL is a medium duty 16T truck that’s ideal for metropolitan deliveries according to MTD’s General Manager Clive Jones, but heavier duty models are on the horizon. Volvo has signalled its intention to offer the entire Volvo Trucks product range fossil-free by 2040.  Electric trucks will play a key role in achieving that goal with the New Zealand order book due to open as early as 2024 for heavy duty trucks (up to 44T).

Volvo Trucks has always been a global leader when it comes to introducing new technology that meets its core values of environmental care and innovation. Delivering against global sustainability and safety targets, as well as on-road performance, is a core focus for the brand.

“The next few months will see us go through the approval and training process to test the FL’s performance under New Zealand conditions,” continued Clive Jones. “It will also give our on-the-ground technical service and support teams the chance to do some hands-on training, putting our team in a great position facing alternative technologies.”

The Volvo FL electric has a 600V system with four traction batteries, 425 NM of torque and a two-speed gearbox. The batteries have an expected life of eight to ten years. At the point when the long-term value of an electric vehicle battery becomes limited for the trucking industry, there is the opportunity for a second life. Electric vehicle batteries retain 70- 80% of their original capacity and can be used in applications within construction and residential settings.

According to Edward Jobson, Senior Director Strategy at Volvo Trucks Sweden, battery production is 80-90% cleaner than diesel production – and there’s an environmental payback of less than a year on commercial vehicles. Environmental payback is classed as the time required to generate as much energy as was consumed during production and lifetime operation of the system.

Meanwhile in New Zealand the electric truck is going through validation tests to see how different driving styles impact battery range - which European trials have set at 150-300kms depending upon conditions and load. Batteries can fully charge over a six-to-eight-hour period using a standard charging system. However, this accelerates with a 150KW charger which gets a flat battery to 85% in just 60 minutes.

The Volvo FL electric is all about the delivery of smooth power and immediate torque that outperforms a diesel engine, according to MTD Senior Product Engineer, Jamie Bell.  “There’s no delay in pulling away from a standing start with an electric powered truck,” commented Jamie. “Where a diesel engine takes some time to get to the top of the torque curve, the FL is there immediately.”

The transport industry will get a first chance to view the Volvo FL at the EROAD Fleet Day 2022 on July 20th at the Globox Arena, Claudelands in Hamilton. A track day is planned later in the year for Volvo Trucks NZ customers and friends and the announcement of a key customer partnership for the commercial phase of the Volvo FL trial is also on the cards – expected in September 2022.