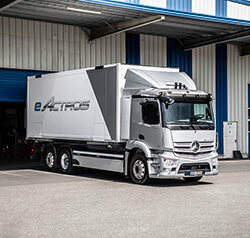 The first series production units of the new Mercedes-Benz eActros began rolling off the production line at Daimler Truck’s Worth am Rein, Germany plant earlier this month.

Production of the battery electric eActros is completed at the Future Truck Centre at Worth, where the electrification of further CO2-neutral Mercedes-Benz trucks will also take place.

And those plans have been further outlined to include series production of the eEconic, developed for municipal use, which is scheduled to start in the second half of 2022 followed by the battery-electric eActros LongHaul from 2024.

"The technology shift in our industry towards locally CO2-neutral trucks also means an immense change for our locations and production. The start of eActros series production is not an everyday ramp-up for us, but a real new beginning," says Sven Gräble, Head of Mercedes-Benz Trucks Operations.

"Our so-called fullflex concept makes it possible to integrate the e-trucks into the existing production. In this way, the plant is able to efficiently and even more quickly adapt to the respective market demand and reliably meet the demanding quality standards of Mercedes-Benz."

Before each eActros arrives at the Future Truck Centre for its electrification, it will be flexibly manufactured on the existing assembly line alongside trucks with conventional drive systems. The assembly of different vehicle types will take place in an integrated manner as far as possible and the basic structure of the vehicle will be built on one assembly line - regardless of whether a conventional combustion engine or an electric powertrain is installed. The eActros then goes to the Future Truck Centre, where the electrification of the vehicle takes place.

Once the two integrated electric motors, including a two-speed transmission, and the high-voltage battery packs have been installed at the Future Truck Centre and the truck is then ready to drive, it is reintegrated into the regular production process for finishing and final inspection.

The new production processes also result in new requirements for the workforce. Starting in 2018, over 2,500 employees have so far received further training in the handling of high-voltage vehicles and components at the site's own training centre in Wörth.

In addition to the trucks, the entire Wörth site, including production, will be CO2-neutral from 2022, just like all other European Daimler Truck plants. A unique green power concept at Daimler makes it possible with CO2-free power procurement from renewable energy sources forming the basis for CO2-neutral production.

As part of this, the site will obtain electricity from wind and solar farms as well as hydroelectric power plants from 2022 onwards. On the way to becoming a green factory, the Mercedes-Benz plant in Wörth is also to operate CO2-free in the long term by successively establishing a completely renewable energy system over the next few years.