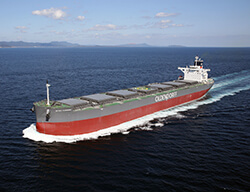 A milestone is looming for the New Zealand log export industry next month when the MV Clemens Oldendorff calls at Port of Tauranga.

The 229m-long post-Panamax category bulk carrier is due in early-November and will be the largest ship to be loaded with logs at a New Zealand port.

It’s the beginning of a new service being operated by South Pacific Shipping (SPS) and Oldendorff Carriers in a deal brokered by Braemar ACM’s Bruce McFarlane, a Mount Maunganui local.

Braemar also negotiated the deal with ISO Stevedoring that delivered the mobile cranes from the manufacturer in Germany, to the port of Tauranga, New Zealand last year.

“We saw an opportunity to bring together two major players from the logs trade and dry bulk shipping to create new economies of scale through the utilisation of the new mobile shore cranes and larger vessels at Tauranga,” says Bruce McFarlane.

The visit by the MV Clemens Oldendorff also introduces a changed loading procedure with ISO Stevedoring using its new harbour cranes to load the vessel. The ship also carries all of its log cargo below deck level.