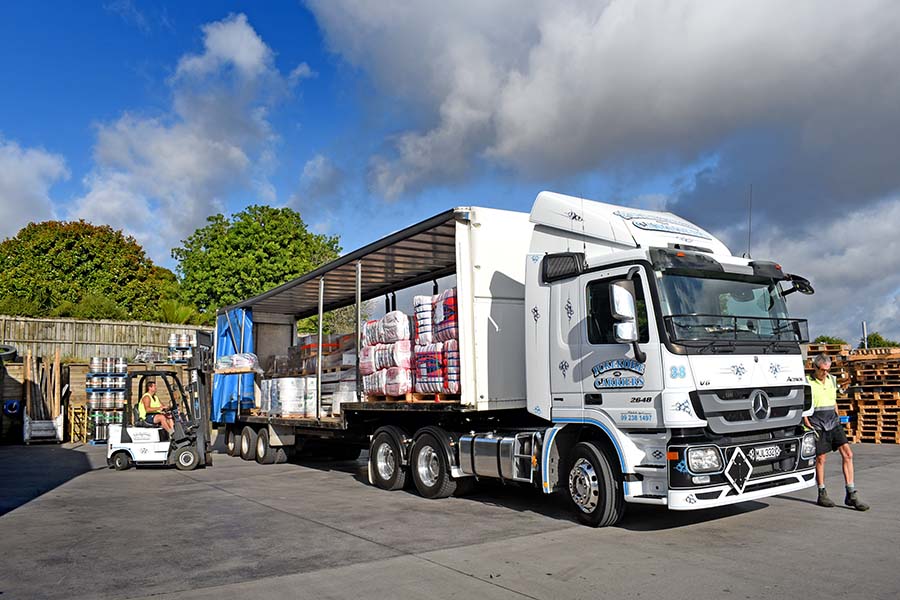 It’s been 100 years of Mack in Australia and naturally, to celebrate it they’ve brought out a 100-Year Anniversary Super-Liner. A couple of them have made their way to New Zealand and we catch up with one of them down in Christchurch at Protranz, with owner Gerard Daldry. It’s an impressive beast with its 58-inch high-rise sleeper and full Australian 100-year customised King bulbar (with under-run protection). It comes complete with the full Aussie Ice Pack, but even on a warm summer’s day in Canterbury we don’t need it. Our job today is to bring back an excavator from out towards Lees Valley to the Protranz yard just down the road from the Christchurch Airport. No visit to Protranz would be complete without a nosey around Gerard’s impressive collection of trucks, with many NZ-built Macks and an extensive range of parts, including several .. 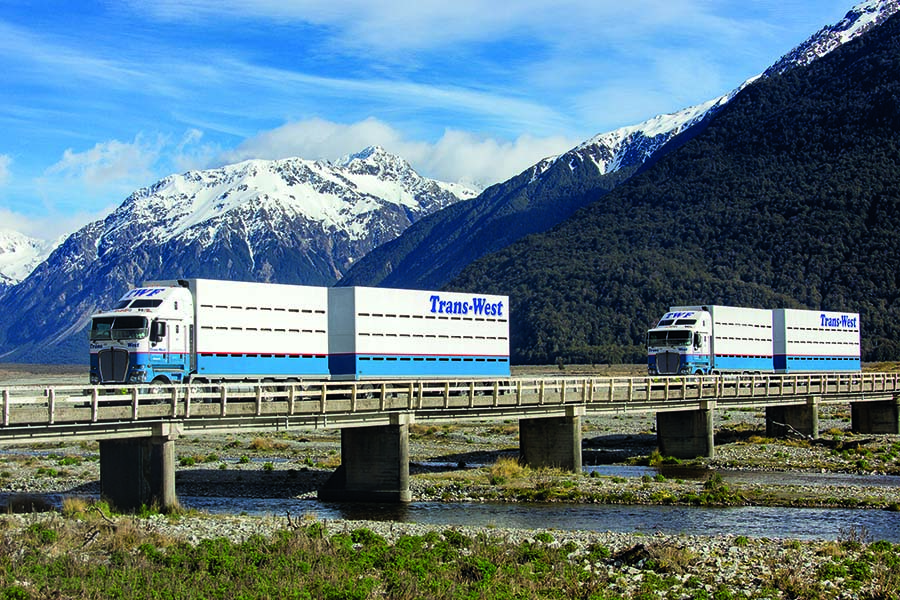 If trucking companies had theme songs, Greymouth-based Trans West Freighters would only need one line from an old David Bowie smash-hit. You know, the one that goes: “Ch-ch-ch-ch-changes.” Yeah, never mind what the rest of the song’s about….that line is Trans West, to a T. I mean, it is an exaggeration to say that for 60-odd years Trans West has been in a state of constant change. But…man alive, this is an operation that, over those six decades, has been rearranged, reshaped…even revived. Some of the changes are lost in the mists of history – some of it gone with the fading memories of old men…some of it already taken to the graves of others. And yet Trans West still lives – 62 years after it was first officially registered, with the late Barry Hurley and Peter Gurr listed in the NZ Companies Office as its directors. ..

Ayna Amima was just 19 when her father convinced her to forget about her fledgling nursing career…. And to instead change tack completely – and join him in starting a trucking company. Initially, she says, “I thought I wouldn’t say yes.” It was, after all, an industry she knew absolutely nothing about. The closest she’d come to anything vaguely related to road transport was back in the Shamim’s former homeland, in Fiji – where her Dad, Mohammed, had run a taxi company. And the young Ayna sometimes “used to take calls from customers.” Still, as she reasons now: “I guess he thought I had the personality to communicate with people.” Regardless of her qualifications seeming to be a world away from helping run a truck company in Auckland, she reckons: “I only took one night to change my mind!” .. 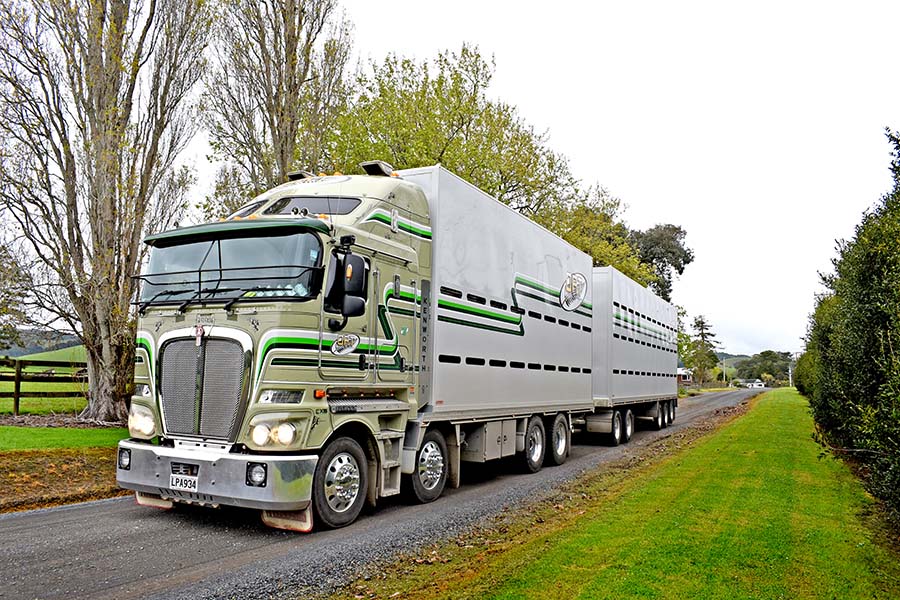 As tough as you make it…

There are a few negatives that come as part and parcel of Don Wilson’s line of trucking business. They come in the form of compliance demands, regulations…..and more compliance demands. And more regulations. All areas of road transport, of course, are subject to these increasing compliance demands, as Don sums up: “The extra things you have to do each day to make your business operate is getting harder and harder.” Don, the boss of Pukekohe’s OnRoad Transport, is the chairman of the National Road Carriers Association – and knows full well how much compliance stuff that NRC does to assist its members, across the industry. But then, if you want to carry livestock – OnRoad Transport’s specialty – the compliance demands ratchet-up dramatically: “Our compliance nowadays is a lot harder than it was 20 years ago. &ldquo.. 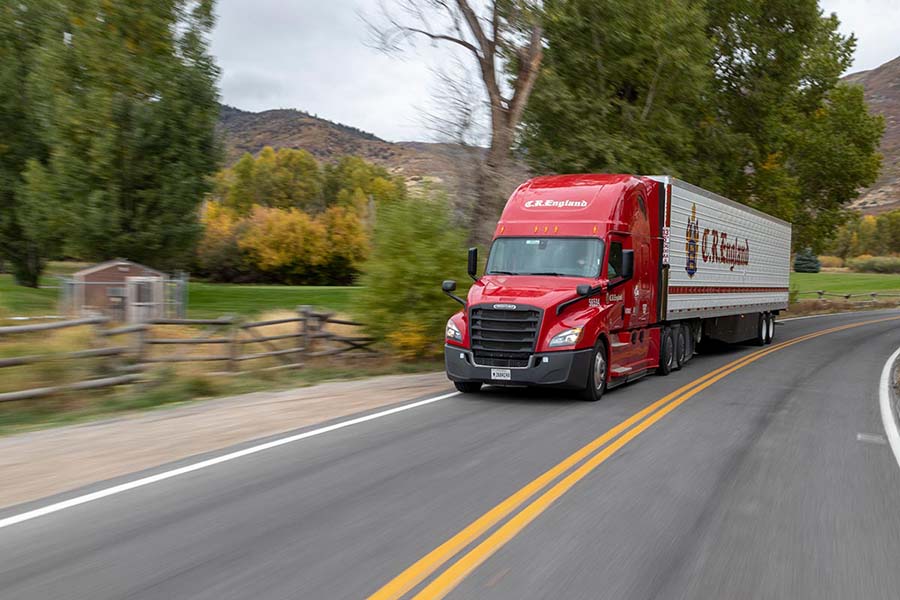 American trucking company exec Ron Hall’s job is to know his trucks…inside out. Actually….no – his knowledge goes way, way beyond that: He knows them in extreme detail. In order to extract the best fuel economy out of giant Utah carrier C.R. England’s fleet, he knows, for instance, exactly what “the sweet spot” is when it comes to diff ratios (2.16:1), engine horsepower (455 horsepower)…and precisely what speed to allow its trucks to run to. That’ll be 65 miles per hour (the equivalent of 104km/h) on cruise control…or 63mph with the foot on the throttle pedal. That’s anywhere between five and 20mph lower than legal limits across the US. He knows that running super-single tyres might help fuel economy…but they don’t stack up when it comes to return on investment. Understands that driver-facing camer..